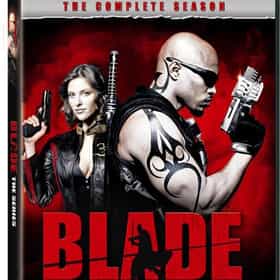 Blade: The Series is a 2006 American live-action television program based on the Marvel Comics character and film series. It premiered on Spike on June 28, 2006. Kirk "Sticky Fingaz" Jones starred in the title role, along with Jill Wagner as Krista Starr, Neil Jackson as Marcus Van Sciver, Jessica Gower as Chase, and Nelson Lee as Shen. The two-hour pilot was directed by Peter O'Fallon from a script by David S. Goyer and comic book writer Geoff Johns. ... more on Wikipedia

Blade: The Series is ranked on...