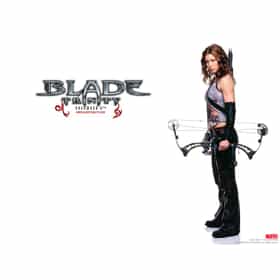 Blade: Trinity is a 2004 American vampire superhero action film written, produced and directed by David S. Goyer who also wrote the screenplays to Blade and Blade II, and also produced by and starring Wesley Snipes in the title role, based on the Marvel Comics character Blade. It is the third and final film in the Blade film series. The film grossed over $128 million at the U.S. box office on a budget of $65 million. The adventures of Blade continue in 2006's Blade: The Series. This was Wesley Snipes' last theatrical release film until 2009's Brooklyn's Finest. ... more on Wikipedia

Blade: Trinity is ranked on...

Blade: Trinity is also found on...