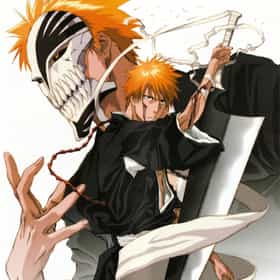 Bleach is a Japanese manga series written and illustrated by Tite Kubo. Bleach follows the adventures of the hotheaded teenager Ichigo Kurosaki after he obtains the powers of a Soul Reaper from another Soul Reaper, Rukia Kuchiki. His new-found powers force him to take on the duties of defending humans from evil spirits and guiding departed souls to the afterlife, and set him on journeys to various ghostly realms of existence.And she also appoints him to be a acting Soul Reaper. Bleach has been serialized in the Japanese manga anthology Weekly Shōnen Jump since August 2001, and has been collected into 67 tankōbon volumes. ... more on Wikipedia

Naruto
Ranking Every Bleach Villain Best to Worst 35.9k votes It's one of the most popular shonen anime of all time, but what are the series' top bad guys? Here is a list of all Bleach v...
The Best Anime Like Bleach 14.8k votes It's one of the most popular shonen anime of all time, but what other similar shows are worth watching? Here are 20+ anime l...
The 20 Best Bankai In 'Bleach' 56.6k votes In the world of Bleach, a Soul Reaper is nothing without their bladed partner, the Zanpakutō. In addition to being a Soul Re...
The Best 'Bleach' Fights Of All Time 14.5k votes Tite Kubo's Bleach is a fascinating supernatural series about teenage rebellion. The 15-year-old protagonist Ichigo Kurosaki...
Here's What You Are Missing In Bleach If You Didn't Continue With The Manga 115.4k views The story of Bleach deserves a proper burial. The manga ended its 15-year run in 2016, but the anime series wrapped prematur...
What Bankai Would You Have Based On Your Zodiac Sign? 60.3k views If you consider yourself a Bleach fan, you've probably thought about what kind of bankai you'd most like to wield. With so m...
The Best Ichigo Kurosaki Quotes 2.3k votes He's the soul reaper protagonist from Bleach, but what are Ichigo Kurosaki's best quotes that give you goosebumps every time...
The Best Bleach Quotes of All Time 1.8k votes Get ready to use your Bankai, because we've created a list of the best Bleach quotes with videos and images to accompany eac...
Which 'Bleach' Character Are You, Based On Your Zodiac Sign? 36.3k views If you're a long-standing Bleach fan, you may have thought about which character has the most in common with you. Maybe you'...
The Best Bleach Arcs In Series History 5.7k votes For eight years, Bleach entertained anime fans with its supernatural story of Ichigo Kurosaki, a 15-year-old high school reb...
Bleach Movies List: Ranked Best to Worst 488 votes List of the best Bleach movies, ranked from best to worst by fans like you. With hundreds of episodes under its belt, it's n...

Bleach is ranked on...