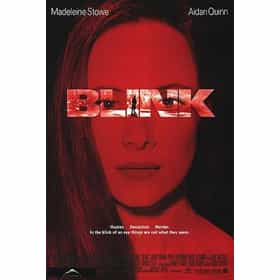 Blink is a 1994 neo-noir thriller film starring Madeleine Stowe and Aidan Quinn. Director Michael Apted was nominated for a Crystal Globe award for the film at the Karlovy Vary International Film Festival, and screenwriter Dana Stevens was nominated for Best Motion Picture at the Edgar Allan Poe Awards. Emmy Award-winning actress Laurie Metcalf also had a role in the film. Chicago rock band The Drovers played a support role as themselves, contributing three songs to the soundtrack. Stowe's character, Emma, is a fiddler in the group. Some scenes were filmed in Chicago, Illinois, USA. ... more on Wikipedia

Blink is ranked on...

Blink is also found on...