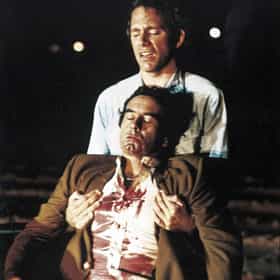 Blood Simple is a 1984 neo-noir film written, produced and directed by Joel and Ethan Coen. It was the directorial debut of the Coens and the first major film of cinematographer Barry Sonnenfeld, who later became a noted director, as well as the feature film debut of Joel Coen's wife Frances McDormand, who subsequently starred in many of his features. The film's title derives from the Dashiell Hammett novel Red Harvest, in which the term "blood simple" describes the addled, fearful mindset of people after a prolonged immersion in violent situations. In 2001, a "Director's Cut" DVD was released. It ranked #98 on AFI's 100 Years... 100 Thrills. ... more on Wikipedia

Blood Simple is ranked on...

Blood Simple is also found on...

List of All Indie Movies Famous Movies Filmed in Texas