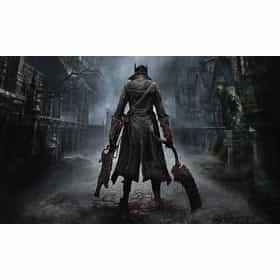 Bloodborne is an action role-playing video game developed by FromSoftware and published by Sony Computer Entertainment for PlayStation 4. Officially announced at Sony's Electronic Entertainment Expo 2014 conference, the game was released worldwide in March 2015. Bloodborne follows the player character, the Hunter, through the decrepit Gothic, Victorian era inspired city of Yharnam, whose inhabitants have been afflicted with an abnormal blood-borne disease. Upon awakening there on the night of the Hunt, the player is forcibly inducted into the ranks of the Hunters and cryptically told to "seek Paleblood". They begin to unravel the city's intriguing mysteries while slaying its ... more on Wikipedia

Bloodborne is ranked on...

#35 of 150 The Best Video Games Of The 2010s, Ranked 99.9k VOTES With so many awesome titles and ground-breaking releases, it’s definitely been a good decade for gamers. While it might be h...
#272 of 402 The Greatest RPG Video Games Ever Made 759.5k VOTES This list shows the ranking of the best pure Role-Playing Games, Action-RPG hybrids and MMORPG's of all time, as voted on by...
#138 of 1,575 The 100+ Best Video Games of All Time, Ranked by Fans 986.2k VOTES These are the greatest games of all time, as voted on and reranked by gamers like yourself. Video games are more popular tha...
#14 of 61 The Best PlayStation 4 Games Of The 2010s 9.3k VOTES There are hundreds of amazing PS4 games that have been released this decade, but which are the best? The PlayStation 4’s lib...
#9 of 119 The Best Playstation 4 Games Released So Far 41.2k VOTES If you've recently purchased a PS4 and are wondering which titles you should pick up immediately, you've come to the ri...
#7 of 21 Modern Video Games Reimagined With Gorgeous Retro Pixel Art 848 VOTES Vintage video games are revered for a reason. There's a timeless quality to classic video games. Sometimes, it's gameplay&nb...
#7 of 60 The Best Playstation 4 RPGs Released So Far 15.4k VOTES PlayStation has a rich history of releasing some of the best role-playing games, and the PS4 is no exception. This list rank...
#7 of 14 Wild Video Game Fan Theories That Will Change The Way You Play 838 VOTES Video games have become one of the world's most popular forms of entertainment. The biggest releases each year can easily br...
#11 of 61 Hardest Video Games of All Time 17k VOTES List of the Hardest Video Games ever made. We all love challenging video games. Games that make us have to work hard to get ...
#7 of 11 11 Video Games That Should Get Anime Adaptations 2.3k VOTES Video games and anime go hand in hand. Both mediums rely heavily on engaging art styles, and often use visual stor...
#2 of 28 The Best Games Like Sekiro: Shadows Die Twice 412 VOTES It's one of the hottest games right now, but what should you play after Sekiro: Shadows Die Twice if you're still hungry for...
#6 of 56 The Best Video Games of 2015 11.7k VOTES 2015 was a pretty good year for gamers. Although it might not have given us any new major systems, we did get a whole lot of...
#8 of 44 The Best Sword Fighting Games Of All Time 2.4k VOTES We’re ranking the best sword fighting games of all time. There are so many iconic swords in video games: the Master Sword fr...
#2 of 26 The Best PlayStation 4 Fantasy Games 431 VOTES Sometimes you just want to get lost in a fantasy, and if you own a PlayStation 4, you should be happy to know that there are...
#37 of 97 The Best PS3 RPGs of All Time 18k VOTES If you owned a Playstation 3 at any time during your life, then it's safe to say there were probably a few role-playing game...
#5 of 42 The Most Popular RPG Video Games Right Now 3.1k VOTES Gamers everywhere, we're ranking the most popular RPG games in 2020. Featuring both old and new games, this list of the most...
#13 of 214 The Best Action Role-Playing Games of All Time 88.5k VOTES These are the best action role-playing games of all time for any console or system, including cover art pictures when availa...
#5 of 25 Great Games For People Who Love 'Death Stranding' 101 VOTES If you've just finished playing Death Stranding and are looking to play the next great masterpiece, you’ve come to the right...

Bloodborne is also found on...