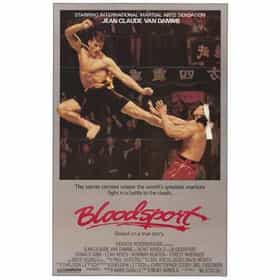 Bloodsport is a 1988 American martial arts film directed by Newt Arnold, and starring Jean-Claude Van Damme, Roy Chiao, Donald Gibb and Leah Ayres. The film is partly based on unverified claims made by martial artist Frank Dux. It sold well at the box office, grossing $11,806,119 domestically on a budget of $1,500,000. Bloodsport was one of Van Damme's first starring films and showcased his athletic abilities. He performs numerous physical feats such as helicopter-style, jump spinning heel kicks, and a complete split. It has since become a cult film. ... more on Wikipedia

The Real Man Behind The Movie Bloodsport Lied About His Entire Life To Get Famous 101k views He's nothing like Van Damme; he's actually nothing like him at all.
The Insane Story Of Frank Dux, Whose Life Allegedly Formed The Basis For 'Bloodsport' 110.6k views If you thought Bloodsport was dramatic, wait until you hear about the story that inspired it. Bloodsport allegedly tells the...

Bloodsport is ranked on...

Bloodsport is also found on...