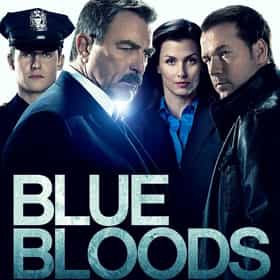 Blue Bloods is an American police procedural drama series shown on CBS in the United States and Canada and on Sky Atlantic in the United Kingdom. The series is filmed on location in New York City with occasional references to nearby suburbs. The show premiered on September 24, 2010, with episodes airing on Fridays following CSI: NY before being moved to Wednesdays at 10:00 p.m. Eastern and Pacific time and 9:00 p.m. Central and Mountain time for a four-week tryout. After four weeks, it returned to its original Friday 10:00 p.m. Eastern timeslot, and has remained there ever since. On March 13, 2014, CBS renewed Blue Bloods for a fifth season, which premiered on September 26, 2014. ... more on Wikipedia

Blue Bloods is ranked on...

Blue Bloods is also found on...