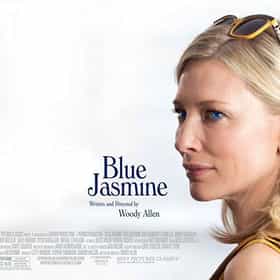 Blue Jasmine is a 2013 American dark comedy-drama film written and directed by Woody Allen. It tells the story of a rich Manhattan socialite who falls into hard times and has to move in to her sister's apartment in San Francisco. The film had a limited release on July 26, 2013, in New York and Los Angeles, before expanding wide on August 23, 2013. Blue Jasmine received praise from the critics, particularly for Blanchett's performance. Blanchett won the Academy Award for Best Actress, and the film received two more nominations—Best Supporting Actress for Sally Hawkins, and Original Screenplay for Allen. Blanchett also won the Golden Globe Award for Best Actress in a Motion Picture – ... more on Wikipedia

Blue Jasmine Movie Quotes 64 votes "Blue Jasmine" movie quotes tell the tale of an affluent woman who loses everything and is forced to find herself ...

Blue Jasmine is ranked on...

#857 of 992 The All-Time Greatest Comedy Films 414k VOTES The best comedy movies of all time are listed here, in one convenient list to be voted on and ranked by true fans. Thes...
#44 of 201 People who voted for Blue Jasmine... also upvote Twin Peaks on TV Shows Canceled Before Their Time also upvote Arrested Development on TV Shows Canceled Before Their Time The Best Movies of 2013 25.1k VOTES A list of the best movies of 2013, as ranked by movie fans and critics. Every year, around the holiday season, film critics ...
#20 of 35 36 Movies That Were Ridiculously Banned Around the World 8.4k VOTES The history of film is littered with movies that were banned for explicit scenes of excessive violence or gratuitous sex. Bu...
#31 of 49 Great Quirky Movies for Grown-Ups 1.6k VOTES Snarky cynics, charming cheaters, and feuding families are prime subjects for great quirky movies for adults. The top quir...
#11 of 69 The Best Woody Allen Movies 7.3k VOTES The best Woody Allen movies of all time rank among some of the best movies of all time, so it's no surprise movie fans would...
#41 of 66 The Best Movies About Getting Dumped 2.1k VOTES There are a lot of ways different people handle getting dumped. Some put on sweatpants and reach for a pint (or 12) of Che...
#26 of 36 The Best "Netflix and Chill" Movies Available Now 17.9k VOTES When you’re dating someone, or even just hooking up, going out on a date can be expensive. And if you’re just trying to get ...
#135 of 144 The Best Films Directed by Famous Actors 104.2k VOTES Several great films were directed by actors. Many of these films went on to win Academy Awards and others became summer bloc...
#7 of 32 The Best Dramas About Relationships Between Sisters 315 VOTES Sisters can be the best of friends, the most loyal of confidants, and sometimes even romantic rivals. The best drama movies ...
#13 of 25 The Best Indie Movies 2013 484 VOTES List of the best indie movies of 2013, as ranked by movie enthusiasts and film critics. Usually the films that get the most ...
#32 of 40 The Most Anticipated Summer 2013 Movies 8.5k VOTES The most anticipated summer 2013 movies are those blockbusters releasing in the warm months during 2013 that we cannot wait ...
#2 of 51 The Best Cate Blanchett Movies of All Time, Ranked Best to Worst 5k VOTES If you’re in the mood to watch the best Cate Blanchett movies of all time, you’ll want to start with the top-ranked films be...
#29 of 33 The Best Oscar Winning Movies On Netflix, Ranked 2.1k VOTES If you're looking for critically-acclaimed films to watch, here are the best Oscar-winning movies on Netflix. Featuring Best...
#11 of 52 The Best Movies Directed by Woody Allen 2.7k VOTES List of all movies directed by Woody Allen ranked from best to worst with photos. Films directed by Woody Allen are listed h...
#27 of 36 The Best Movies About Breakups 3.3k VOTES There’s almost nothing that will make you feel better about being dumped or being, well single than watching a great movie a...
#57 of 78 The Best Alec Baldwin Movies 2.7k VOTES Here are the best Alec Baldwin movies, ranked best to worst with movie trailers when available. With over 50 films in his ...
#21 of 50 The Best Drama Movies of 2013 467 VOTES List of the best 2013 drama movies, ranked by how many upvotes they've received by other fans of the genre. Some of the movi...
#5 of 22 The Best Comedy Movies Set in San Francisco 49 VOTES It's always nice to see comedy movies based in San Francisco. So many take place in New York or Los Angeles that seeing one ...

Blue Jasmine is also found on...