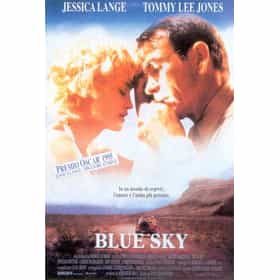 Blue Sky is a 1994 drama, and the last film by veteran film maker Tony Richardson. It was adapted by Rama Laurie Stagner, Arlene Sarner and Jerry Leichtling from a story by Rama Laurie Stagner. It stars Jessica Lange, Tommy Lee Jones, Powers Boothe, Carrie Snodgress, Amy Locane and Chris O'Donnell. The original music score was composed by Jack Nitzsche. The film was completed in 1991, but because of the bankruptcy of Orion Pictures, it sat on the shelf until 1994, three years after director Richardson's death in November 14, 1991. Despite this, the film won critical praise and Lange garnered the 1994 Academy Award for Best Actress, along with the Golden Globe Award, the Los Angeles ... more on Wikipedia

Blue Sky is ranked on...

Blue Sky is also found on...