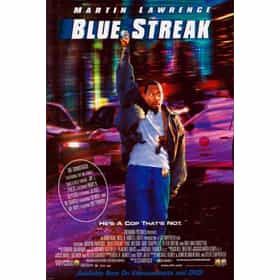 Blue Streak is a 1999 film, directed by Les Mayfield with Martin Lawrence. The director has also directed other famous films, including the remake of Miracle on Thirty-fourth Street in 1994. In addition to the Lawrence film also other famous actors including Dave Chappelle, Luke Wilson and Peter Greene. The film comes in theaters September 17, 1999 in first place in the rankings of North America. The film earned at the box office of $60 million, and has therefore been a huge success since it has almost doubled its production costs. In 2003 began work on a sequel, but it was never realized, and was deleted from the projects of Columbia Pictures. Even the soundtrack was very successful, ... more on Wikipedia

Blue Streak is ranked on...

Blue Streak is also found on...