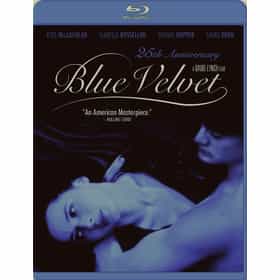 Blue Velvet is a 1986 American mystery thriller flm, written and directed by David Lynch. The film stars Kyle MacLachlan, Isabella Rossellini, Dennis Hopper and Laura Dern. The title is taken from The Clovers' 1955 song of the same name. Although initially polarising some mainstream critics, the film is now widely acclaimed as one of the greatest films of the nineteen eighties, and earned Lynch his second Academy Award nomination for Best Director. As an example of a director casting against the norm, Blue Velvet is also noted for re-launching Hopper's career and for providing Rossellini with a dramatic outlet beyond the work as a fashion model and a cosmetics spokeswoman for which she ... more on Wikipedia

Blue Velvet is ranked on...

Blue Velvet is also found on...