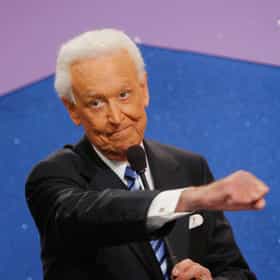 Robert William Barker (born December 12, 1923) is a retired American television game show host. He is known for hosting CBS's The Price Is Right from 1972 to 2007, making it the longest-running daytime game show in North American television history. He is also known for hosting Truth or Consequences from 1956 to 1974. Born in Darrington, Washington, to modest circumstances, Barker enlisted in the United States Navy during World War II. He worked part-time in radio while he attended college. In 1950, he moved to California in order to pursue a career in broadcasting. He was given his own radio show, The Bob Barker Show, which ran for six years. Barker began his game show career in 1956, ... more on Wikipedia

Bob Barker is ranked on...

#10 of 1,041 Celebrity Death Pool 2020 102.3k VOTES They may be beloved performers, award winners, or game changers, but no matter how famous, you can’t escape death. This cele...
#66 of 313 Famous People Most Likely to Live to 100 13.8k VOTES Sometimes, age really is just a number. But these healthy old celebrities seem to be defying time like no others. These clas...
#10 of 1,445 Celebrity Death Pool 2018 477.7k VOTES Welcome to Celebrity Death Pool 2018! In increasingly uncertain times, there remains one constant in life - we all die. Cele...
#23 of 862 Celebrity Death Pool 2016 370.1k VOTES Celebrity death pool 2016: Here's a large list of celebrities we think just might die this year. The only certainties in l...
#2 of 52 The Game Show Hosts With The Most 6.2k VOTES If you're a fan of quiz shows like Jeopardy, then you probably already know how important a great game show hosts are to the...
#12 of 159 Celebrity Death Pool 2013 15.4k VOTES Every year we lose more and more famous celebrities. Whether it's from natural causes, suicide, drug abuse or just plain cra...
#10 of 165 Celebrity Death Pool 2012 26.8k VOTES In a somewhat morbid twist on celebrity deaths, this list is a celebrity death pool. You can vote for the person who you thi...
#26 of 185 Celebrity Death Pool 2014 31.5k VOTES Celebrity death pool 2014: Here's a complete list of celebrities who just might die in 2014. Every year we lose more and mor...
#8 of 17 Inspirational Stories of Humans Who Advocate for Dogs 450 VOTES Everyone loves a good rescue story. We sit on the edge of our seats in the movie theaters, watch the dramatic stories p...
The Locations of All Hollywood Walk of Fame Stars 419.8k VIEWS A list of stars on the Hollywood Walk of Fame, with photos. This list includes all television and movie stars. Acquiring a s...
Celebrities with Crazy Hobbies 210.3k VIEWS Celebrities can often be pretty eccentric. Combining an artistic personality with endless money can mean some pretty odd pur...
Famous People Named Bob or Robert 74.9k VIEWS List of famous people named Bob, along with photos. How many celebrities named Robert can you think of? The famous Bobs belo...
22 Celebs Who Are Saving the Environment 14.5k VIEWS Several popular actors, actresses, and musicians are big-time environmentalists. Some of these eco-friendly celebrities work...
Famous People Whose Last Name Is Barker 2.9k VIEWS Being a fairly common name, it's no surprise there are a lot of famous people with the last name Barker. Do you recognize al...

Bob Barker is also found on...