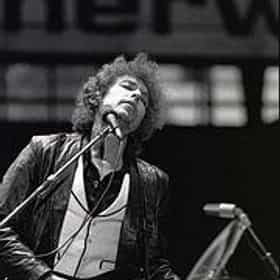 Bob Dylan (born Robert Allen Zimmerman; May 24, 1941) is an American singer-songwriter, author, poet, and visual artist who has been a major figure in popular culture for more than fifty years. Much of his most celebrated work dates from the 1960s, when songs such as "Blowin' in the Wind" (1963) and "The Times They Are a-Changin'" (1964) became anthems for the Civil Rights Movement and anti-war movement. His lyrics during this period incorporated a wide range of political, social, philosophical, and literary influences, defied pop-music conventions and appealed to the burgeoning counterculture. Following his self-titled debut album in 1962, which mainly comprised ... more on Wikipedia

Jimi Hendrix
The Best Bob Dylan Songs 21.7k votes Bob Dylan is often acclaimed as the greatest songwriter ever; it's no surprise that he's in the top two on Ranker's list of ...
Interesting Bob Dylan Facts You May Not Know 1.6k views You have to wonder. After giving us Prince, the Replacements, and Bob Dylan, why hasn't the entire state of Minnesota been i...
The Best Bob Dylan Albums of All Time 5.7k votes Widely regarded as one of the best singer/songwriters, Bob Dylan is also known for being one of the best lyricists. Starting...
A List of Famous Bob Dylan Quotes 2.2k votes A list of quotes from Bob Dylan's writings, interviews and songs, featuring the best Bob Dylan quotes on various subjects. D...
Everyone Bob Dylan Has Dated 14.5k views Who is Bob Dylan dating? Many famous women have dated Bob Dylan, and this list will give you more details about these lucky ...
The Best Bob Dylan Movies 522 votes List of the best Bob Dylan movies, ranked best to worst with movie trailers when available. Bob Dylan's highest grossing mov...
25 Pictures of Young Bob Dylan 8.5k views This list features pictures of young Bob Dylan, the author of the famous song “Blowin’ in the Wind,” which was extremely inf...

Bob Dylan is ranked on...

Bob Dylan is also found on...