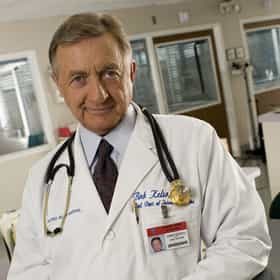 Robert "Bob" Kelso, M.D., is a fictional character played by Ken Jenkins in the American comedy-drama Scrubs. Bob Kelso is the chief of medicine for Sacred Heart Hospital for the first seven seasons of Scrubs, though he resigns in the episode "My Dumb Luck". Kelso appeared in every episode during the first eight seasons except three Season 8 episodes, "My Last Words", "Their Story II" and "My Full Moon". Ken Jenkins was a regular cast member for the first eight seasons, and appeared in nine episodes of season nine. ... more on Wikipedia

Bob Kelso is ranked on...

#913 of 1,608 The Greatest TV Characters of All Time 1.2M VOTES List of TV's most memorable characters, of all time, chosen by the Ranker community. What makes a character live on in the p...
#80 of 121 The Greatest TV Doctors 82.7k VOTES List of the best television doctors, ranked by fans of the doctor characters and their medical shows. Plenty of memorable TV...
#53 of 81 The Fictional Bosses You'd Least Like to Work For 5.8k VOTES List of the fictional bosses you’d least like to work for. Think your boss is bad? Your boss may not even compare to some of...
#7 of 19 Popular Characters From TV Shows Everyone Hates That You Secretly Love 274 VOTES Certain TV characters are easy to hate. They're whiny; they make too much money; sometimes they're just truly horrible ...
#15 of 104 Fictional Characters Named Bob & Robert 3.7k VOTES List of notable fictional characters whose name is Bob or Robert, including photos when available. The fictional characters ...
#5 of 25 The Best Scrubs Characters of All Time 3.7k VOTES List of the best Scrubs characters, with pictures and character bios when available. Don't be surprised if all the original ...