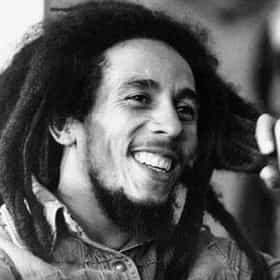 Robert Nesta Marley, (6 February 1945 – 11 May 1981) was a Jamaican singer and songwriter. Considered one of the pioneers of reggae, his musical career was marked by blending elements of reggae, ska, and rocksteady, as well as forging a smooth and distinctive vocal and songwriting style. Marley's contributions to music increased the visibility of Jamaican music worldwide, and made him a global figure in popular culture for over a decade.Born in Nine Mile, British Jamaica, Marley began his professional musical career in 1963, after forming Bob Marley and the Wailers. The group released its debut studio album The Wailing Wailers in 1965, which contained the single "One Love/People ... more on Wikipedia

Bob Marley is ranked on...

Bob Marley is also found on...