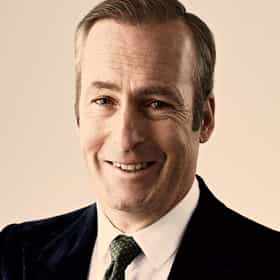 Robert John Odenkirk (born October 22, 1962) is an American actor, comedian, writer, director, and producer. He is best known for his role as smooth-talking lawyer Saul Goodman/Jimmy McGill on the AMC crime drama series Breaking Bad and its spin-off Better Call Saul, and for the HBO sketch comedy series Mr. Show with Bob and David, which he co-created and starred in with fellow comic and friend David Cross.From the late 1980s to 1990s, Odenkirk worked as a writer for television shows Saturday Night Live and The Ben Stiller Show, winning two Emmys for his work. He also wrote for Late Night with Conan O'Brien, Get a Life, and acted in a recurring role as Agent Stevie Grant in The Larry ... more on Wikipedia

Bob Odenkirk is ranked on...

#160 of 408 The Funniest Stand Up Comedians Of All Time 1M VOTES A ranked list of the best stand up comedians in the history of the art form. First and foremost, all of the people on this l...
#6 of 24 Who Would Star In 'Ferris Bueller's Day Off' If It Were Made Today? 5k VOTES We live in an age of reboots and remakes. Although there is currently no plan for a Ferris Bueller remake, it’s still fun to...
#7 of 20 The Top Actors Who Should Play J. Jonah Jameson 4.3k VOTES J. Jonah Jameson has been left out of the Marc Webb Spider-Man films, and for good reason. J.K. Simmons, who played the char...
#49 of 50 Who Was America's Crazy Uncle in 2015? 3.3k VOTES Everyone has that one crazy uncle who you can always count on to say something ridiculous and insane at a family reunion, an...
#114 of 159 The Best Directors of the 2000s 3.8k VOTES The best directors of the 2000s rank among some of the greatest living directors and most among the best directors of all ti...
Famous Second City Members 10.3k VIEWS List of Famous Second City Members ranked by fame and popularity. The Second City is a improv based sketch comedy organizati...
#4 of 39 The Funniest Alternative Comedians of All Time 1.4k VOTES   This list contains information about the best alternative comedians, loosely ranked by user votes. The best alt com...
19 Comedians You Might Not Know Wrote for SNL 16.1k VIEWS In the world of comedy, many high-profile comedians got their start on the institution that is Saturday Night Live. Comedian...
How the Cast of How I Met Your Mother Aged from the First to Last Season 35.7k VIEWS From hanging out at MacLaren's to navigating the ups and downs of relationships, viewers laughed along while watching the ca...
35 Times You've Seen the Actors from Fargo Before 16.2k VIEWS From unknowns to seasoned pros, the Fargo TV series actors come from all parts. Newbie Allison Tolman came out of ...

Bob Odenkirk is also found on...