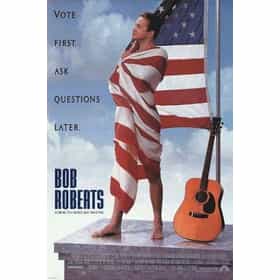 Bob Roberts is a 1992 satirical mockumentary film written, directed by and starring Tim Robbins. It tells the rise of Bob Roberts, a right-wing politician who is a candidate for an upcoming United States Senate election. Roberts is well financed, due mainly to past business dealings, and is well known for his music, which presents conservative ideas with gusto. The film is Robbins' directorial debut, and is based on a short segment of the same name and featuring the same character that Robbins did for Saturday Night Live on December 13, 1986. ... more on Wikipedia

Bob Roberts is ranked on...

Bob Roberts is also found on...