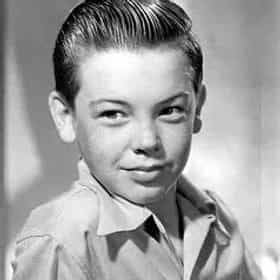 Robert Cletus Driscoll (March 3, 1937 – March 30, 1968) was an American child actor and artist known for a large body of cinema and TV performances from 1943 to 1960. He starred in some of the Walt Disney Studios' most popular live-action pictures of that period, such as Song of the South (1946), So Dear to My Heart (1949), and Treasure Island (1950). He served as animation model and provided the voice for the title role in Peter Pan (1953). In 1950, he received an Academy Juvenile Award for outstanding performance in feature films of 1949, for his roles in So Dear to My Heart and The Window, both released in 1949. In the mid 1950s, Driscoll's acting career began to decline, and he ... more on Wikipedia

Bobby Driscoll is ranked on...

#941 of 1,151 The Best Actors in Film History 2.2M VOTES The best actors ever are ranked here in this list of the best actors in film history. These are the greatest actors ever to ...
The Locations of All Hollywood Walk of Fame Stars 418k VIEWS A list of stars on the Hollywood Walk of Fame, with photos. This list includes all television and movie stars. Acquiring a s...
Child Actors Who Tragically Died Young 38.4M VIEWS Child actors who died young include some of the most recognizable names in entertainment. All the actors and actresses liste...
53 Celebrities Who Have Been Homeless 669.8k VIEWS List of famous people who were homeless, loosely ranked by fame and popularity. A surprising number of famous actors, sing...
11 Child Stars Who Got Fired Because They Grew Up Too Fast 257.3k VIEWS It was the question that plagued every TV fan in the mid-2000s: what happened to Walt on Lost? The character's sudden disapp...

Bobby Driscoll is also found on...