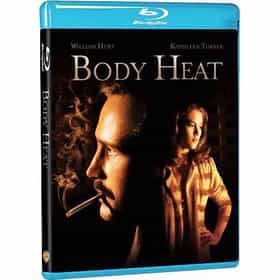 Body Heat is a 1981 American neo-noir thriller film written and directed by Lawrence Kasdan. It stars William Hurt, Kathleen Turner and Richard Crenna, and features Ted Danson, J.A. Preston, and Mickey Rourke. The film was inspired by Double Indemnity and Out of the Past. The film launched Turner's careerEmpire magazine cited the film in 1995. The New York Times wrote in 2005 that, propelled by her "jaw-dropping movie debut [in] Body Heat ... she built a career on adventurousness and frank sexuality born of robust physicality." ... more on Wikipedia

Body Heat is ranked on...

Body Heat is also found on...

List of All Movies Released in 1981 Movies with Cinematography by Richard H. Kline