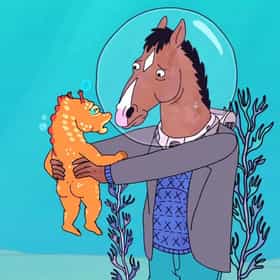 BoJack Horseman (Netflix, 2014) is an American animated sitcom created by Raphael Bob-Waksberg. BoJack Horseman (Will Arnett) was the star of the hit television show "Horsin' Around" in the '80s and '90s, now he's washed up, living in Hollywood, complaining about everything, and wearing colorful sweaters. The show is designed by the cartoonist Lisa Hanawalt, who had previously worked with Bob-Waksberg on the webcomic Tip Me Over, Pour Me Out. ... more on Wikipedia

BoJack Horseman is ranked on...

BoJack Horseman is also found on...