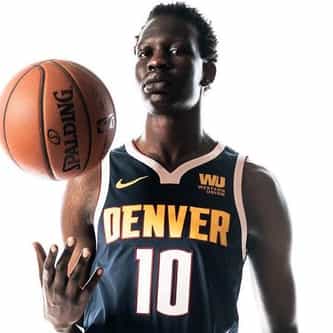 Bol Manute Bol (born November 16, 1999) is a Sudanese-American professional basketball player for the Denver Nuggets of the National Basketball Association (NBA). He played college basketball for the Oregon Ducks. A son of basketball player Manute Bol, Bol was born in Khartoum but began living in Kansas from a young age. In high school, Bol was considered one of the best players in the class of 2018, having been rated a consensus five-star recruit and earning McDonald's All-American ... more on Wikipedia

Bol Bol IS LISTED ON