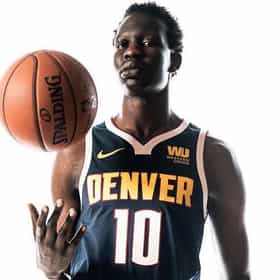 Bol Manute Bol (born November 16, 1999) is a Sudanese-American professional basketball player for the Denver Nuggets of the National Basketball Association (NBA). He played college basketball for the Oregon Ducks. A son of basketball player Manute Bol, Bol was born in Khartoum but began living in Kansas from a young age. In high school, Bol was considered one of the best players in the class of 2018, having been rated a consensus five-star recruit and earning McDonald's All-American honors. He plays the center position. ... more on Wikipedia

#24 of 81 The Most Likable Players In The NBA Today 5.4k VOTES The most likable NBA players can be anybody from tremendous superstars to beloved role players. Fans and peers often ma...
#20 of 31 Every Player Over 7 Feet Tall In The NBA Today, Ranked 321 VOTES The tallest basketball player in the league right now is Tacko Fall, who in a league of giants towers over many of his oppon...
#18 of 60 Who Will Be The 2020 NBA Rookie Of The Year? 17.8k VOTES All the candidates for the 2019-20 NBA Rookie of the Year award have something to prove. But the one NBA rookie with the mos...
#12 of 30 The Tallest NBA Players of All Time, Ranked 8.5k VOTES We're ranking the tallest basketball players by how well they played in the NBA. Some of these players remain among the...
#10 of 62 2019 NBA Draft: Predicting The Number 1 Pick 1.6k VOTES With 2019 NBA Mock Drafts already underway be sure to vote up your favorites on this list. Obviously drawing from the best c...
#63 of 71 The Best Current NBA International Players 18.7k VOTES With so many of the greatest NBA players of all time being from outside the US, it's time to recognize the best internationa...
Every Player Injured During The 2019-20 NBA Season (So Far) 1.2k VIEWS A new basketball season unfortunately often means a new spate of injuries, and the worst NBA injuries of 2019 are proof that...