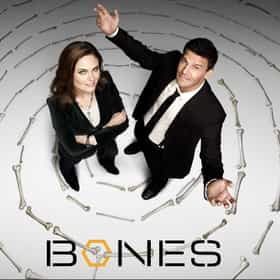 Bones is an American procedural comedy-drama television series that premiered on Fox in the United States on September 13, 2005. The show is based on forensic anthropology and forensic archaeology, with each episode focusing on an FBI case file concerning the mystery behind remains brought by FBI Special Agent Seeley Booth to forensic anthropologist Dr. Temperance "Bones" Brennan. The rest of the main cast includes Michaela Conlin, T. J. Thyne, Eric Millegan, Jonathan Adams, Tamara Taylor, John Francis Daley, and John Boyd. ... more on Wikipedia

The Best Bones Episodes 11.5k votes List of the best Bones episodes, as determined by voters like you. Crime drama fans will also enjoy the best Criminal Minds ...
The Best Seasons of Bones 1.1k votes We're ranking the best seasons of Bones, with the help of your votes. One of the best TV series based on books, Bones als...
Human Bones Or Animal Bones? Here's How You Can Tell The Difference 20k views If you ever stumble upon bones - and you're not an anthropologist, a veterinarian, or an archaeologist - it may be difficult...

Bones is ranked on...

Bones is also found on...