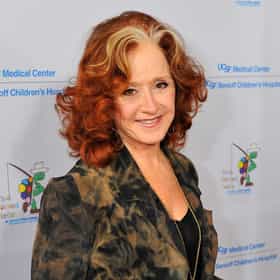 Bonnie Lynn Raitt (born November 8, 1949) is an American blues singer, guitarist, songwriter, and activist. During the 1970s, Raitt released a series of roots-influenced albums that incorporated elements of blues, rock, folk and country. In 1989, after several years of critical acclaim but little commercial success, she had a major hit with the album Nick of Time. The following two albums, Luck of the Draw (1991) and Longing in Their Hearts (1994), were also multimillion sellers, generating several hit singles, including "Something to Talk About", "Love Sneakin' Up on You", and the ballad "I Can't Make You Love Me" (with Bruce Hornsby on piano). Raitt has ... more on Wikipedia

The Best Bonnie Raitt Albums of All Time 309 votes Bonnie Raitt is considered one of the greatest female rock stars and best singer/songwriters of all time. List of the best B...

Bonnie Raitt is ranked on...

Bonnie Raitt is also found on...