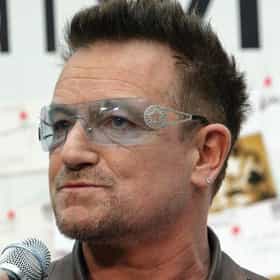 Paul David Hewson, KBE OL (born 10 May 1960), known by his stage name Bono (), is an Irish singer-songwriter, musician, venture capitalist, businessman, and philanthropist. He is best known as the lead vocalist and primary lyricist of rock band U2. Bono was born and raised in Dublin, Ireland. He attended Mount Temple Comprehensive School where he met his future wife, Alison Stewart, as well as schoolmates with whom he founded U2 in 1976. Bono soon established himself as a passionate frontman for the band through his expressive vocal style and grandiose gestures and songwriting. His lyrics are known for their social and political themes, and for their religious imagery inspired by his ... more on Wikipedia

15 Fascinating Things You Didn't Know About Bono 2.1k views U2 isn't just one of the biggest bands in the world, they're also one of the most long-lasting. Since exploding into the mus...

Bono is ranked on...

Bono is also found on...