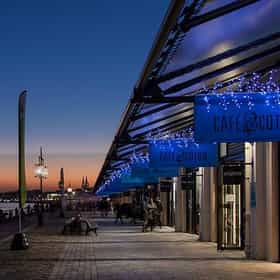 Bordeaux is a port city on the Garonne River in the Gironde department in southwestern France. The small municipality of Bordeaux proper has a population of 239,399,. Together with its suburbs and satellite towns Bordeaux is the center of the Métropole de Bordeaux, with 737 492 inhabitants the 4th largest in France. The urban / metro area, even larger and more populated than the Metropole territorial subdivision, has no real existence in France, yet for Bordeaux the figure is slightly above 1.1 million inhabitants. It is the capital of the Aquitaine region, as well as the prefecture of the Gironde department. Its inhabitants are called "Bordelais" or ... more on Wikipedia

Bordeaux is ranked on...

#55 of 374 The Best European Cities to Visit 60.6k VOTES The top cities to visit including all the best places to go in Europe. The best cities to visit in Europe are all on this li...
#47 of 118 The Most Beautiful Cities in Europe 43.3k VOTES List of the most beautiful cities in Europe, as ranked by Europeans and world travelers from all over the globe. When any wa...
#34 of 54 The Best European Cities for Backpacking 3.6k VOTES Backpacking through Europe is a right of passage--and an adventure--that many young adults embark upon. When you're backpa...
#13 of 49 The Top Must-See Attractions in France 1k VOTES List of must-see attractions in France that include the best sights throughout the entire country. Those include the best ...
Gay Events & Pride Parades Around the World 17.5k VIEWS Here is a list of gay pride parades and gay events celebrated around the world. The LGBT Community in each city plans and pu...