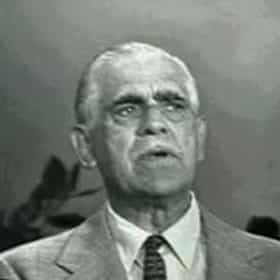 William Henry Pratt (23 November 1887 – 2 February 1969), better known by his stage name Boris Karloff (), was an English actor who was primarily known for his roles in horror films. He portrayed Frankenstein's monster in Frankenstein (1931), Bride of Frankenstein (1935) and Son of Frankenstein (1939). He also appeared as Imhotep in The Mummy (1932). In non-horror roles, he is best known to modern audiences for narrating and as the voice of Grinch in the animated television special of Dr. Seuss' How the Grinch Stole Christmas! (1966). For his contribution to film and television, Boris Karloff was awarded two stars on the Hollywood Walk of Fame. ... more on Wikipedia

Boris Karloff is ranked on...

#125 of 351 The Greatest Entertainers of All Time 118.9k VOTES When it comes to the greatest entertainers of all time, we're truly blessed to live in an age where technology allows u...
#420 of 2,830 The Most Influential People of All Time 2.4M VOTES This is a list of the most influential people of all of human history. This means that the individuals on this list have had...
#307 of 2,003 People who voted for Boris Karloff... also upvote Anthony Hopkins on The Best Actors Working Today also upvote Alien Franchise on The Best Movies of All Time The Greatest Actors & Actresses in Entertainment History 1.7M VOTES The best actors and actresses of all time, male and female, ranked by film fans worldwide. This list of greatest actors and ...
#212 of 311 Which Actor Would You Bring Back for One Final Movie? 186.8k VOTES We asked, you answered. Fans of the Ranker Facebook page chose which dead actors they’d like to bring back to life for just ...
#355 of 525 Famous Men You'd Want to Have a Beer With 1.8M VOTES If given the opportunity to sit down for a beer with any famous male figure, which famous men would you most want to get a d...
#40 of 161 People who voted for Boris Karloff... People in the Midwest are 2x more likely to vote for this People outside of the US are 2x more likely to vote for this These Big-Name Celebs Have Been Hiding Their Real Names 99.8k VOTES List of real names of celebrities, including actors, singers, wrestlers, and even politicians. Many actors and actresses use...
Celebrities You Didn't Know Use Stage Names 1.8M VIEWS List of celebrities with stage names, loosely ranked according to fame and popularity. It's tough to break into show busin...
#10 of 29 The Best Mad Magazine Covers 2k VOTES List of the most memorable Mad Magazine covers, featuring the coolest photographs, sexiest celebrity shots, and most innov...
#1 of 27 The Best Actors Who Played Frankenstein's Monster 2.9k VOTES We all know that, actually, the doctor's name is Frankenstein, but that doesn't really stop most of us from calling the mons...
Celebrities Who Have Been Married 4 (or More!) Times 1.1M VIEWS Famous people seem to have a knack for binge marrying. Divorces and weddings come and go with such frequency that it can bec...
Filmsite's Great Actors (Male) Who Have Not Won An Oscar 10.3k VIEWS Filmsite's list of the greatest actors to never win an Oscar. These actors have done great work in the industry but have n...

Boris Karloff is also found on...