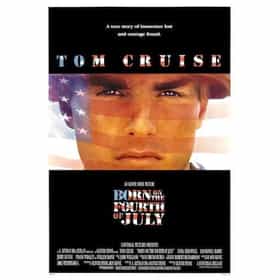 Born on the Fourth of July, published in 1976, is the best selling autobiography by Ron Kovic, a Vietnam veteran who became an activist. Kovic was born on July 4, 1946, and his book's ironic title echoed a famous line from George M. Cohan's patriotic 1904 song, "The Yankee Doodle Boy". The book was adapted into a 1989 Academy Award winning film of the same name co-written by Oliver Stone and Ron Kovic, starring Tom Cruise as Kovic. ... more on Wikipedia

Born on the Fourth of July is ranked on...

#108 of 382 The Best War Movies Ever 504.7k VOTES This list ranks the best movies about war, battles, and military conflicts. These films recreate some of the most significan...
#179 of 575 The Greatest Movies Of The 1980s, Ranked 507.2k VOTES Since it was one of the greatest decades for film, here's a list of the best movies of the 80s. These are the most popu...
#53 of 145 The Most Utterly Depressing Movies Ever Made 41k VOTES These films are depressing, but they're also remarkable. After all, what's better than depressing movies when you need to si...
#27 of 102 Movies That Turned 30 in 2019 6.4k VOTES Take a trip down memory lane with this list of movies that turned 30 in 2019. Featuring dramas, cult classics, well-made com...
#121 of 304 The Greatest Soundtracks of All Time 136.5k VOTES The best soundtracks ever are more than just a collection of songs in a particular order; they evoke and accentuates th...
#97 of 240 The Best Movies Based on True Stories 57k VOTES "Based on a true story" is so commonly thrown around it's practically the new "in a world where..." as f...
#14 of 110 The Best Movies of 1989 11.1k VOTES A list of the best movies of 1989, from light dramas like Field of Dreams to action movies like Batman.The '80s were a decad...
#186 of 710 The Best Movies Roger Ebert Gave Four Stars 160.2k VOTES List of movies Roger Ebert gave four stars, ranked best to eh. This is NOT a complete list of all of Roger Ebert's four star...
#234 of 378 The Greatest Movie Themes 79.9k VOTES A memorable movie theme song is an underrated crucial element that helps turn a great movie into an iconic one. At its core,...
#14 of 42 The All-Time Best Tom Cruise Movies 24.8k VOTES The best all-time Tom Cruise movies show the iconic drama and action-movie star in his finest performances. Cruise is easily...
#22 of 50 The Best Oscar-Nominated Movies of the '80s 1.1k VOTES De Niro. Hepburn. Winfrey. The biggest movies of the 1980s captured audiences' imaginations thanks to outstanding performanc...
#25 of 47 The Biggest Oscar Bait Films of All Time 6.3k VOTES There are a number of ways in which a film could be classified as "Oscar bait," and not all Oscar bait movies are ...
#5 of 33 The Best Historical Movies Released in the 1980s 685 VOTES What are the best historical movies from the 1980s? This list includes great historical movies such as Glory, Amadeus, and N...
#110 of 211 The Best Historical Drama Movies of All Time, Ranked 99.3k VOTES Moviegoers rank the best historical drama movies  and period pieces of all time below. So what makes a good historical ...
#42 of 303 The Best Military Movies Ever Made 124.5k VOTES Good military films give civilians a taste of what our troops go through on the battlefield and throughout their daily lives...
The Best Biography Movies 36.3k VIEWS A list of all the best biography movies ever made, many of which are streaming on Netflix and Amazon Prime. This biopic movi...
15 Movies That Were Originally Conceived As Sequels 1.6k VIEWS With so many movie sequels and reboots being made today in Hollywood, it's amazing that any original movie gets made. Howeve...
#62 of 110 The Best Movies About Mental Illness 22.9k VOTES This list features the best movies about mental illnesses. The films on this list cover an array of different mental illness...
#18 of 75 The Best Vietnam War Movies 40.1k VOTES Vietnam War movies can almost be counted as a genre on their own--there are so many of them. This Vietnam War movies list ca...
#19 of 29 The Best War Movies of the 1980s 1.5k VOTES War is hell. And it doesn’t matter if you love it or hate it. On this of the best 80s war movies you’ll find films that glor...
EW.com's Spot the Anachronism in 10 Movies 3.7k VIEWS EW's 10 anachronistic films. These movies have characters or scenes that belong in an earlier time period. For the full arti...

Born on the Fourth of July is also found on...

Every Oscar Winning Film Ever Films Scored By John Williams List of Popular Books About the Vietnam War List of All Movies Released in 1989 Movies Produced by A. Kitman Ho