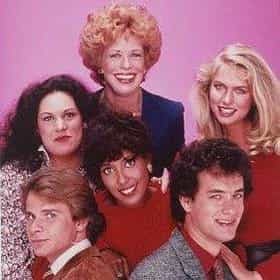 Bosom Buddies is an American sitcom starring Tom Hanks and Peter Scolari created by Robert L. Boyett, Thomas L. Miller and Chris Thompson. It ran from 1980 to 1982 on ABC and in reruns in the summer of 1984 on NBC. The show features the misadventures of two single men, working in creative advertising, struggling in their industry while disguising themselves as women in order to live in the one apartment they could afford. Gender stereotypes and male/female interpersonal relationships were frequent themes. The show became known for its quirky humor and its frequent use of improvisation, especially between stars Hanks and Scolari. Though the show started out with good ratings, it failed ... more on Wikipedia

Bosom Buddies is ranked on...

#112 of 590 The Best TV Theme Songs of All Time 323.2k VOTES The best TV theme songs and TV intros of all time will take you back to some of the greatest moments in TV. Television theme...
#36 of 65 People who voted for Bosom Buddies... also upvote Star Trek Franchise on The Best Star Trek Movies also upvote Star Trek Franchise on The Best Space Movies The Best Sitcoms of the 1980s 130.5k VOTES What are the best 80's sitcoms? The 1980s were truly a golden age for television comedy, with many of the most popular TV si...
#102 of 204 The Most Important TV Sitcoms 82.5k VOTES These sitcoms are important because they either influenced a generation's culture or because they permanently influenced the...
#60 of 89 The Best 1980s Primetime TV Shows 17k VOTES The 1980s had some great shows. But, which of the TV shows from the 1980s is the best? That's up to you! Vote up your favori...
#33 of 53 The Best ABC Comedies of All Time 7.4k VOTES List of the best ABC comedies of all time as voted, ranked by fans who watched them live or as reruns. This list includes ...
#110 of 510 The Best '80s TV Shows 208.8k VOTES List of the best television shows from the '80s, as ranked by television fans. In the 1980s, sitcoms were among the most tal...
#59 of 107 The Best TV Shows Set In New York City 1.9k VOTES If you love New York then you're in luck because it is a very popular setting for a television series. It's not just that it...
#19 of 36 The Best 1980s ABC Shows 2.7k VOTES Remember the '80s? 1980s ABC shows, specifically? You're about to, because this list of '80s ABC shows ranks the network's s...
#20 of 28 The Best Comedy Shows About Roommates, Ranked 1.5k VOTES Put a bunch of larger-than-life characters in cramped living quarters, and the sparks - and laughs - are bound to fly. ...
#14 of 22 The Best 1980s ABC Comedy Shows 540 VOTES Take a stroll down memory lane with the best 1980s ABC comedy shows, ranked by user votes. The best '80s ABC comedy shows ca...
TV Shows With Absolutely No Sense Of New York Geography 6.3k VIEWS There's a lot of stuff about living in New York television gets completely wrong. From two broke buddies...

Bosom Buddies is also found on...