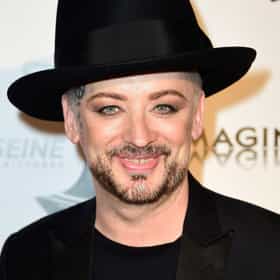 Boy George (born George Alan O'Dowd; 14 June 1961) is an English singer, songwriter, DJ and fashion designer. He is the lead singer of the pop band Culture Club. At the height of the band's fame, during the 1980s, they recorded global hit songs such as "Karma Chameleon", "Do You Really Want to Hurt Me" and "Time (Clock of the Heart)". George is known for his soulful voice and androgynous appearance. He was part of the English New Romantic movement which emerged in the late 1970s to the early 1980s. His music is often classified as blue-eyed soul, which is influenced by rhythm and blues and reggae. He was lead singer of Jesus Loves You during the period ... more on Wikipedia

Boy George is ranked on...

#325 of 1,041 Celebrity Death Pool 2020 102.3k VOTES They may be beloved performers, award winners, or game changers, but no matter how famous, you can’t escape death. This cele...
#142 of 191 The Greatest Male Pop Singers of All Time 429.7k VOTES These are the top male pop singers of all time. This list of male pop stars is for you to vote on to decide just who is the ...
#663 of 2,175 The Greatest Musical Artists of All Time 13.4M VOTES When VH1 polled fellow artists to name the greatest artists of all time, it seemed like a good idea---but in reality, the li...
#228 of 359 The Greatest Entertainers of All Time 130.7k VOTES When it comes to the greatest entertainers of all time, we're truly blessed to live in an age where technology allows u...
#89 of 367 People who voted for Boy George... Women are 2x more likely to vote for this also upvote Harry Potter Franchise on The Best Movies of All Time The Best Pop Artists of the 1980s 388.2k VOTES The 1980s was a huge decade in terms of breaking pop stars. 80s artists benefited from the rising popularity of cable televi...
#234 of 1,038 The Worst Bands & Musicians of All Time 1.3M VOTES The worst bands in music history, ranked by music fans (and haters.) This list contains the most awful bands to listen to fr...
#10 of 65 The Greatest Gay Icons in Music 59.5k VOTES List of the Greatest Gay Icons in Music, ranked by fans. Gay icons come in all shapes and sizes. Some are fiercely bold diva...
#6 of 20 20 Famous Celebrities Who Are Also DJs 838 VOTES   Since the early 2000s, DJing has become one of the highest paying careers in the world. Famous DJs are be...
Famous Gemini Male Celebrities 35k VIEWS A Gemini may often be of two minds about things, but that very adaptability is why there are so many famous Gemini men. Thei...
#35 of 66 The 40+ Greatest Tenor Singers in Music History 9.8k VOTES The greatest tenor singers of all time include some very recognizable musicians, many with incredibly distinct voices. These...
Famous People Whose Last Name Is George 6.8k VIEWS Being a fairly common name, it's no surprise there are a lot of famous people with the last name George. Do you recognize al...
18 Photos of Makeup-Wearing Male Celebs Without Their Makeup On 7.9M VIEWS   Male celebrities who wear makeup are a special breed. They’re confident enough to look a little silly for the sake ...
The Most Famous 80s Popstars (Then and Now) 129.6k VIEWS Anyone that lived through the 1980s likely has nothing but fond memories of the music from that era. The '80s represented a ...
38 Celebrities Who Wrote Cookbooks 23.5k VIEWS Several famous actors, singers, and rappers have written their own cookbooks. Some celebs focus on specialty diets like vega...
11 Gay Celebrities Who Came Out in the 1980s 480.7k VIEWS Gay, bisexual, lesbian, and transexual individuals started to gain more public support in the 1980s. Although gay actors, wr...
20+ Celebrities Who Love To Cook 62.4k VIEWS This list contains information about celebrities who cook, loosely ranked by fame and popularity. Several famous actors, mus...
14 Celebrities Who Were Arrested in Foreign Countries 46.5k VIEWS Getting arrested in a foreign country sounds absolutely terrifying. Think about it - you're locked up in an unfamiliar place...
17 Celebrity Face Cakes That Don't Look Quite Right 92.6k VIEWS No matter who they are, all celebrities have some defining feature about them (a mole, their weathered good lucks, etc.) tha...

Boy George is also found on...