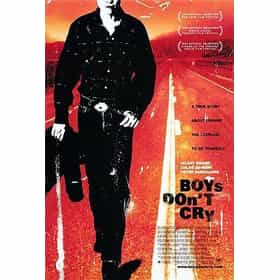 Boys Don't Cry is a 1999 American independent romantic drama film directed by Kimberly Peirce and co-written by Andy Bienen. The film is a dramatization of the real-life story of Brandon Teena, a trans man played in the film by Hilary Swank, who is beaten, who's life is taken by his male acquaintances after they discover he is anatomically female. The film explores the themes of freedom, courage, identity and empowerment. Despite being largely an independent production, Boys Don't Cry was distributed by Fox Searchlight Pictures and was released theatrically in October 1999. ... more on Wikipedia

Boys Don't Cry is ranked on...