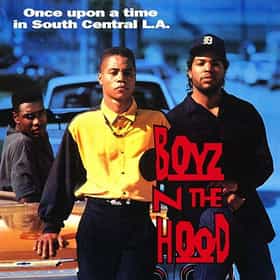 Boyz n the Hood is a 1991 American hood drama written and directed by John Singleton in his directorial debut, and starring Ice Cube, Cuba Gooding Jr., Morris Chestnut, Laurence Fishburne, Nia Long and Angela Bassett, depicting life in South Central Los Angeles. This was the film debut for both Ice Cube and Morris Chestnut. Boyz n the Hood was filmed from October 1 to November 28, 1990 and released on July 12, 1991. It was nominated for both Best Director and Original Screenplay during the 1991 Academy Awards, making Singleton the youngest person ever nominated for Best Director and the first African–American to be nominated for the award. The film was screened in the Un Certain Regard ... more on Wikipedia

Boyz n the Hood is ranked on...

Boyz n the Hood is also found on...