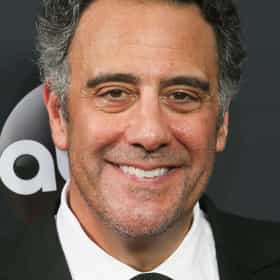 Brad H. Gerstenfeld (born April 14, 1960), known professionally as Brad Garrett, is an American stand-up comedian, actor, voice actor and professional poker player. He has appeared in numerous television and film roles. Garrett was initially successful as a stand-up comedian in the early 1980s. Taking advantage of that success in the late 1980s, Garrett began appearing in television and film, in minor and guest roles. His first major role was Robert Barone on the CBS sitcom Everybody Loves Raymond. The series debuted September 13, 1996 and ran for nine seasons. In 2002, he gave an Emmy-nominated and critically lauded performance as Jackie Gleason in the television film Gleason. ... more on Wikipedia

Brad Garrett is ranked on...

#201 of 408 The Funniest Stand Up Comedians Of All Time 999.5k VOTES A ranked list of the best stand up comedians in the history of the art form. First and foremost, all of the people on this l...
#410 of 514 People who voted for Brad Garrett... People under 30 are 2x more likely to vote for this Celebrities Nobody Cares About Anymore 3.4M VOTES Some of the greatest actors of all time have, in recent days, turned into a bunch of washed-up hacks that would be somehow b...
#50 of 54 The Best Emmy Hosts Ever 9k VOTES Hosting the Emmy awards is a tough gig. Just showing up for the Primetime Emmys requires wit and reflexes so Emmy hosts who ...
#27 of 27 The Best Male Stand Up Comedians of the 2000s 2.7k VOTES The best 2000s stand up comedians range from blue collar humor to just straight blue humor to intellectually stimulating o...
#25 of 41 Comedians Who Use Stage Names 1.1k VOTES These comedians knew that it's tough to make a name in comedy and that literally making themselves a stage name was the best...
#75 of 75 The Best WTF With Marc Maron Podcast Episodes Of 2019 42 VOTES Since Marc Maron's first episode of WTF in 2009, his podcast has touched on a deep and broad range of topics that varies wit...
Celebrities You Didn't Know Use Stage Names 1.7M VIEWS List of celebrities with stage names, loosely ranked according to fame and popularity. It's tough to break into show busin...
Famous Tall Men Over 6'2 443.8k VIEWS Some of the tallest men in Hollywood may not seem so on your screen. Paired alongside other tall actors, shorts actors weari...
Famous People Named Brad 21.8k VIEWS List of famous people named Brad, along with photos. How many celebrities named Bradley can you think of? The famous Brads b...
#84 of 140 Dreamcasting Celebrities We Want To See On The Masked Singer 6.7k VOTES The US version of The Masked Singer has taken social media by storm and no wonder. With secret, costumed celebrities and clu...
25+ Comedians Who Were on Star Search 44.2k VIEWS Long before there was American Idol, The X Factor, or America's Got Talent, there was Star Search, hosted by Ed McMahon. Som...
35 Times You've Seen the Actors from Fargo Before 16.2k VIEWS From unknowns to seasoned pros, the Fargo TV series actors come from all parts. Newbie Allison Tolman came out of ...

Brad Garrett is also found on...