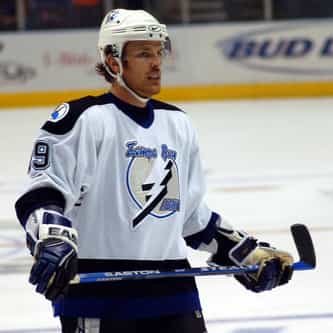 Bradley Glenn Richards (born May 2, 1980) is a Canadian former professional ice hockey centre. Richards was drafted in the third round, 64th overall, by the Tampa Bay Lightning in the 1998 NHL Entry Draft and played for the Lightning, New York Rangers, Dallas Stars, Chicago Blackhawks and Detroit Red Wings during his National Hockey League (NHL) career. Richards won the Stanley Cup in 2004 with the Lightning, where he was awarded the Conn Smythe Trophy as the Most Valuable Player during ... more on Wikipedia

Brad Richards IS LISTED ON