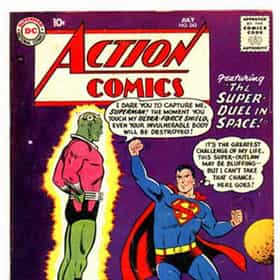 Brainiac is a fictional supervillain that appears in American comic books published by DC Comics. The character first appeared in Action Comics #242, and was created by Otto Binder and Al Plastino. An extraterrestrial android, Brainiac is a principal foe of Superman, and is responsible for shrinking and stealing Kandor, the capital city of Superman's home planet Krypton. Due to multiple revisions of DC's continuity, several variations of Brainiac have appeared. Most incarnations of Brainiac depict him as a green-skinned being in humanoid form. He is bald, except for a set of diodes protruding from his skull. The character is the origin of the informal word which means ... more on Wikipedia

Brainiac is ranked on...

#26 of 102 Comic Book Characters We Want to See on Film 133.1k VOTES   Certain comic book characters definitely lend themselves to film better than others. Sometimes it's their costume...
#10 of 12 The 12 Most Indestructible Comic Book Characters 26.6k VOTES In the world of comics, a character's "unintentional" death or severe injury is rarely seen, partly because it doe...
#29 of 58 The Best Villains the Teen Titans Have Ever Faced 5.4k VOTES We all love Teen Titans, but who are the best Teen Titans villains of all time? The Teen Titans are a group of young, teenag...
#1 of 20 The Smartest Characters in Comic Books 27.9k VOTES When it comes to comic book super powers, brains are every bit as handy as brawn — but props to those who have both. From co...
All Superman Villains & Enemies Listed 265.7k VIEWS This is a collection of all Superman's supervillains that have appeared in comic books or movies as Superman enemies. Use ...
#8 of 20 The Best Comic Book Characters Who Have Red Eyes 209 VOTES Red eyes in real life might be cause for alarm, but in the world of comic books, characters have red eyes all of the ti...
15 Classic Examples of Chaotic Evil Characters 23.9k VIEWS “Chaotic evil (CE) creatures act with arbitrary violence, spurred by their greed, hatred, or bloodlust.” - Dungeons and Drag...
#15 of 51 List of Artificial Intelligence Characters 2.4k VOTES For this poll we've created a list of the greatest AI of all time, featuring AI characters you know from movies, television,...

Brainiac is also found on...