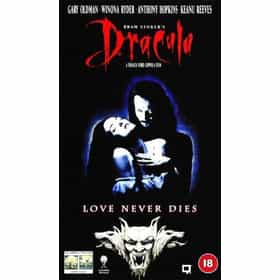 Bram Stoker's Dracula is a 1992 American horror film directed and produced by Francis Ford Coppola, based on the 1897 Gothic horror novel by Bram Stoker. Count Dracula (Gary Oldman), a 15th-century prince, is condemned to live off the blood of the living for eternity. Young lawyer Jonathan Harker (Keanu Reeves) is sent to Dracula's castle to finalize a land deal, but when the Count sees a photo of Harker's fiancée, Mina (Winona Ryder), the spitting image of his dead wife, he imprisons him and sets off for London to track her down. ... more on Wikipedia

Bram Stoker's Dracula is ranked on...