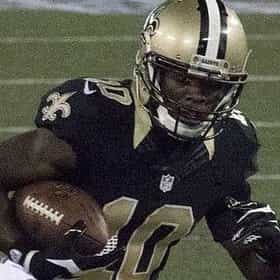 Brandin Tawan Cooks (born September 25, 1993) is an American football wide receiver for the Los Angeles Rams of the National Football League (NFL). He was drafted by the New Orleans Saints in the first round of the 2014 NFL Draft. He played college football at Oregon State, where he received All-American recognition in 2013. Cooks was born to Worth Cooks Sr. and Andrea Cooks on September 25, 1993. Worth Sr. died of a heart attack when Brandin was 6 years old and Cooks and his three brothers, Fred, Worth Jr., and Andre, were thereafter raised by Andrea. He attended Lincoln High School in Stockton, California, where he played high school football for the Trojans. As a sophomore, he ... more on Wikipedia

Brandin Cooks is ranked on...