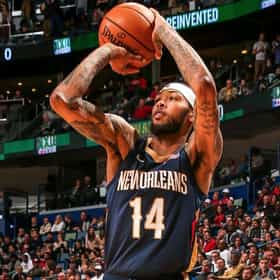 Brandon Xavier Ingram (born September 2, 1997) is an American professional basketball player for the New Orleans Pelicans of the National Basketball Association (NBA). He was selected by the Los Angeles Lakers with the second overall pick in the 2016 NBA draft, and was named to the NBA All-Rookie Second Team. Ingram had a successful high school career in North Carolina, where he won state titles each of his four years of high school and was named North Carolina's Mr. Basketball. He played one season of college basketball for the Duke Blue Devils, where he was named Atlantic Coast Conference Rookie of the Year. After the season, Ingram decided to forego his remaining college eligibility ... more on Wikipedia

Brandon Ingram is ranked on...