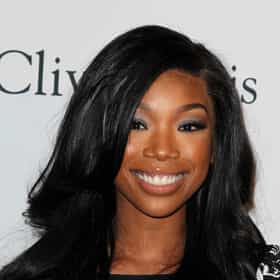 Brandy Rayana Norwood (born February 11, 1979), known professionally by her mononym Brandy, is an American singer, songwriter, record producer, and actress. Born into a musical family in McComb, Mississippi and raised in Carson, California, she began her career as a child and performed as a backing vocalist for teen groups. In 1993, Norwood signed with Atlantic Records. The following year, she released her self-titled debut album, which was certified quadruple Platinum in the US, selling six million copies worldwide. Norwood starred in the UPN sitcom Moesha as the title character, which lasted six seasons and resulted in numerous other roles. She resumed her music career in 1998 with ... more on Wikipedia

Brandy Norwood is ranked on...

Brandy Norwood is also found on...