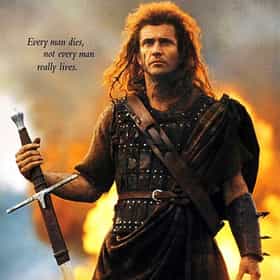 Braveheart is a 1995 epic historical medieval war drama film directed by and starring Mel Gibson. Gibson portrays William Wallace, a 13th-century Scottish warrior who led the Scots in the First War of Scottish Independence against King Edward I of England. The story is based on Blind Harry's epic poem The Actes and Deidis of the Illustre and Vallyeant Campioun Schir William Wallace and was adapted for the screen by Randall Wallace. The film was nominated for ten Academy Awards at the 68th Academy Awards and won five: Best Picture, Best Makeup, Best Cinematography, Best Sound Editing, and Best Director. ... more on Wikipedia

Here’s What Actually Happened After The End Of ‘Braveheart’ 2.5k views In the final scene of Braveheart, William Wallace's personal sacrifice inspires all Scotsmen to fight for their freedom at t...
How The 'Braveheart' Actors Compare To Their Real Historical Counterparts 1.1k votes Braveheart was a huge success at the box office and earned 10 Academy Award nominations after its 1995 release. The movie, d...
Here's What All The Stars Of 'Braveheart' Look Like Now 25.2k views It's surprising to see the career trajectory of many of our favorite stars, especially to witness how they've changed over a...

Braveheart is ranked on...

Braveheart is also found on...