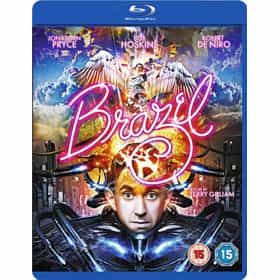 Brazil is a 1985 British film directed by Terry Gilliam and written by Gilliam, Charles McKeown, and Tom Stoppard. British National Cinema by Sarah Street describes the film as a "fantasy/satire on bureaucratic society" while John Scalzi's Rough Guide to Sci-Fi Movies describes it as a "dystopian satire". The film stars Jonathan Pryce and features Robert De Niro, Kim Greist, Michael Palin, Katherine Helmond, Bob Hoskins, and Ian Holm. The film centres on Sam Lowry, a man trying to find a woman who appears in his dreams while he is working in a mind-numbing job and living a life in a small apartment, set in a consumer-driven dystopian world in which there is an ... more on Wikipedia

Brazil is ranked on...

Brazil is also found on...