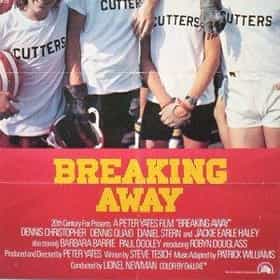 Breaking Away is a 1979 American coming of age comedy-drama film that follows a group of four male teenagers in Bloomington, Indiana, who have recently graduated from high school. It stars Dennis Christopher, Dennis Quaid, Daniel Stern, Jackie Earle Haley, Barbara Barrie, and Paul Dooley. The film was written by Steve Tesich and directed by Peter Yates. It was shot in and around Bloomington and on the university's campus. Breaking Away won the 1979 Academy Award for Best Original Screenplay for Tesich, and received nominations in four other categories. It also won the 1979 Golden Globe Award for Best Film, and received nominations in three other Golden Globe categories. As the film's ... more on Wikipedia

Breaking Away is ranked on...

Breaking Away is also found on...