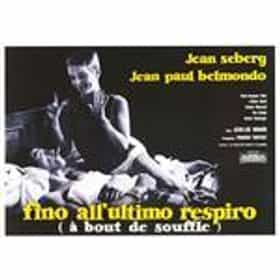 Breathless is a 1960 French film written and directed by Jean-Luc Godard about a wandering wrong doer and his American girlfriend. It was Godard's first feature-length work and represented Belmondo's breakthrough as an actor. Breathless was one of the earliest, most influential examples of the French New Wave. Together with François Truffaut's The 400 Blows and Alain Resnais's Hiroshima, Mon Amour, both released a year earlier, it brought international acclaim to this new style of French filmmaking. ... more on Wikipedia

Breathless is ranked on...

#68 of 113 The Best Mafia Films 103.5k VOTES The mafia has been a source of some of the best stories in film history for filmmakers. The drama, action, and moral dilemma...
#51 of 139 The Greatest Movies in World Cinema History 6.5k VOTES Hollywood may be the epicenter of the movie business, but many of the best films released each year hail from all over the w...
#4 of 80 The Best French Movies That Are Absolute Masterpieces 2.5k VOTES Artistic cinematography, romantic stories, and creative directing have made French films a favorite all over the world. The ...
#84 of 131 The Best Existentialism Movies 5.5k VOTES A list of all the best existentialism movies ever made, many of which are streaming on Netflix and Amazon Prime. For more mo...
#15 of 122 The Best Movies of 1960 3.9k VOTES List of the best movies of 1960, with movie trailers when available. 1960 was the last year that ﻿﻿Marilyn Monroe and Clar...
#21 of 55 The Best Movies That Are Based in Paris 550 VOTES The Eiffel Tower, romantic cafes, the Louvre Museum, Notre Dame Cathedral, Versailles Palace, Moulin Rouge – these are just ...
#1 of 51 The Best Jean-Paul Belmondo Movies 548 VOTES List of the best Jean-Paul Belmondo movies, ranked best to worst with movie trailers when available. Jean-Paul Belmondo's hi...
Fantastic Movies Americans Missed Out on Because of the Language Barrier 9.7k VIEWS Outside cinephiles and film students, most American movie-goers do not watch foreign films. It’s just a fact of cinema life....

Breathless is also found on...