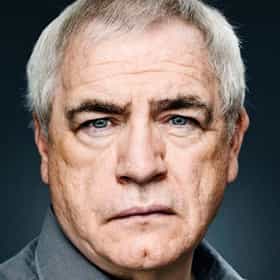 Brian Denis Cox (born 1 June 1946) is a Scottish actor who works with the Royal Shakespeare Company, where he gained recognition for his portrayal of King Lear. Cox is also known for appearing in Super Troopers, The Bourne Identity, The Bourne Supremacy, X2, Braveheart, Rushmore, Rise of the Planet of the Apes, and Troy. He was the first actor to portray Hannibal Lecter on film in 1986's Manhunter. An Emmy Award winner, Cox has also been nominated for Golden Globe, BAFTA, and Screen Actors Guild Awards. In 2006, Empire readers voted him the recipient of the Empire Icon Award. ... more on Wikipedia

Brian Cox is ranked on...

#438 of 1,139 The Best Actors in Film History 2.3M VOTES The best actors ever are ranked here in this list of the best actors in film history. These are the greatest actors ever to ...
#136 of 258 The Best Marvel Movie Actors Ever 633.7k VOTES Ah Marvel movies. It began in 1944 with serialized films of Captain America and 70 years later, are one of the biggest, most...
#18 of 61 The Best Scottish Actors of All Time 73k VOTES Scotland isn't just about whiskey, it's also the home country of many of Hollywood's top actors. This list of the best Scott...
#10 of 19 Who Would Star In 'Caddyshack' Today? 1.6k VOTES Caddyshack premiered 40 years ago and was a smashing success. Don’t you think it’s due for a remake? With a new crop of come...
#13 of 45 The Best Living Scottish Actors 3.7k VOTES From McAvoy to McGregor, there are tons of amazing actors alive today who all hail from the country of Scotland. Hollywood h...
Here's What All The Stars Of 'Braveheart' Look Like Now 25.3k VIEWS It's surprising to see the career trajectory of many of our favorite stars, especially to witness how they've changed over a...
Famous People Named Brian 47.6k VIEWS List of famous people named Brian, along with photos. How many celebrities named Bryan can you think of? The famous Brians b...
#18 of 27 The Best Wired Covers 534 VOTES List of the most memorable Wired Magazine covers, featuring the coolest photographs, sexiest celebrity shots, and most innov...

Brian Cox is also found on...