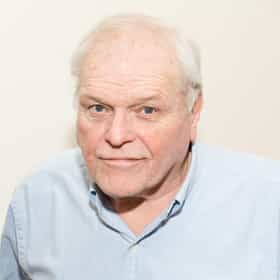 Brian Manion Dennehy (born July 9, 1938) is an American actor of film, stage, and television. A winner of one Golden Globe, two Tony Awards and a recipient of six Primetime Emmy Award nominations, he gained initial recognition for his role as Sheriff Will Teasle in First Blood (1982). He has had roles in numerous films including Gorky Park (1983), Silverado (1985), Cocoon (1985), F/X (1986), Presumed Innocent (1990), Romeo + Juliet (1996), and Knight of Cups (2015). Dennehy won the Golden Globe Award for Best Actor in a Miniseries or Television Film for his role as Willy Loman in the television film Death of a Salesman (2000). ... more on Wikipedia

Brian Dennehy is ranked on...

#266 of 1,148 The Best Actors in Film History 2.2M VOTES The best actors ever are ranked here in this list of the best actors in film history. These are the greatest actors ever to ...
#189 of 332 The Coolest Actors Ever 747.3k VOTES As movie fans, we like to think of our favorite actors as being larger than life. With all of the coverage that these stars ...
#169 of 1,042 Celebrity Death Pool 2020 72.3k VOTES They may be beloved performers, award winners, or game changers, but no matter how famous, you can’t escape death. This cele...
#102 of 160 Celebrity Death Pool 2013 15.4k VOTES Every year we lose more and more famous celebrities. Whether it's from natural causes, suicide, drug abuse or just plain cra...
Celebrities Who Were In The Military 7.7M VIEWS The many celebrities who were in the military signed up to make the ultimate sacrifice for their countries. Through the year...
25 Celebrities Who Became Famous After 40 54.7k VIEWS Not all celebrities found fame and fortune in their twenties or even in their thirties. Several famous actors, authors, and ...
29 Celebrities Who Were In Sigma Chi 402.5k VIEWS   This list contains information about famous Sigma Chis, loosely ranked by fame and popularity. Sigma Chis is a Gree...
51 Celebrities from Long Island 63.9k VIEWS Stretching from the New York Harbor to the Atlantic ocean, Long Island is an interesting microcosm of the New York experienc...
99 Celebrities Who Went to Ivy League Schools 380.7k VIEWS Celebrities who went to Ivy League schools are those smarty pants actors, musicians, and other famous people in the entert...

Brian Dennehy is also found on...