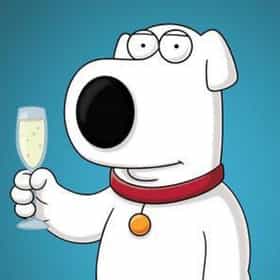 Brian Griffin is a fictional character from the animated television series Family Guy. An anthropomorphic dog, voiced by Seth MacFarlane, he is one of the show's main characters and a member of the Griffin family. He primarily works in the series as a struggling writer, attempting essays, novels, screenplays and newspaper articles. He first appeared on television, along with the rest of the family, in a 15-minute short on December 20, 1998. Brian was created and designed by MacFarlane himself. MacFarlane was asked to pitch a pilot to the Fox Broadcasting Company, based on The Life of Larry and Larry & Steve, two shorts made by MacFarlane featuring a middle-aged character named ... more on Wikipedia

Brian Griffin is ranked on...