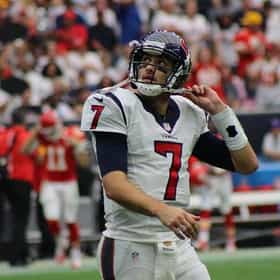 Brian Axel Hoyer (born October 13, 1985) is an American football quarterback for the New England Patriots of the National Football League (NFL). He was signed by the Patriots as an undrafted free agent in 2009 and returned in 2017. He played college football at Michigan State. A journeyman quarterback, Hoyer has also played for the Pittsburgh Steelers, Arizona Cardinals, Cleveland Browns, Houston Texans, Chicago Bears, and San Francisco 49ers. He won Super Bowl LIII with the Patriots as the backup to Tom Brady. ... more on Wikipedia

Brian Hoyer is ranked on...