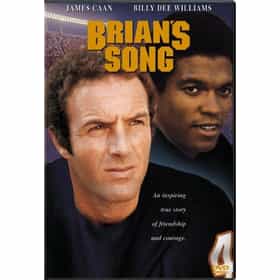 Brian's Song is a 1971 ABC Movie of the Week that recounts the details of the life of Brian Piccolo, a Wake Forest University football player stricken with terminal cancer after turning pro, told through his friendship with Chicago Bears running back teammate and Pro Football Hall of Famer Gale Sayers, who helps him through the difficult struggle. The production was such a success on ABC that it was later shown in theaters by Columbia Pictures with a major premiere in Chicago; however, it was soon withdrawn due to a lack of business. Critics have called the movie one of the finest telefilms ever made. A 2005 readers poll taken by "Entertainment Weekly" ranked 'Brian's Song' ... more on Wikipedia

Brian's Song is ranked on...

Brian's Song is also found on...