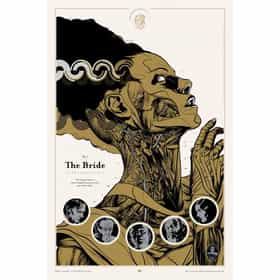 Bride of Frankenstein is a 1935 American horror film, the first sequel to Frankenstein. Bride of Frankenstein was directed by James Whale and stars Boris Karloff as The Monster, Elsa Lanchester in the dual role of his mate and Mary Shelley, Colin Clive as Henry Frankenstein, and Ernest Thesiger as Doctor Septimus Pretorius. The film follows on immediately from the events of the earlier film, and is rooted in a subplot of the original Mary Shelley novel, Frankenstein. In the film, a chastened Henry Frankenstein abandons his plans to create life, only to be tempted and finally coerced by the Monster, encouraged by Henry's old mentor Dr. Pretorius, into constructing a mate for him. ... more on Wikipedia

Bride of Frankenstein is ranked on...

#604 of 1,699 The Most Rewatchable Movies 3.4M VOTES There are some movies that I always stop at and watch if I see them on TV or I can put in the DVD player and watch when I'm ...
#387 of 6,106 The Best Movies Of All Time 5.6M VOTES These are the best movies of all time, ranked by movie experts and film fans alike. What are the greatest movies in cinema h...
#131 of 179 The Best Movie Sequels Ever Made 118.9k VOTES What are the best movie sequels ever made? This list includes several of the greatest movies of all time, and they all have ...
#38 of 103 The Best Halloween Movies for Kids 29.7k VOTES Halloween movies for kids include some holiday classics and some newer films that are quickly becoming classics. The best Ha...
#31 of 99 The Best Horror Movie Sequels 28.2k VOTES Does your favorite horror film keep the frights coming with an awesome sequel? Browse through this list of the best horror m...
#3 of 20 The Best Horror Movies With Weddings, Ranked 694 VOTES The best horror movies with weddings couple supernatural terror with the anxiety of prepping for the big day. Most of them h...
#6 of 15 Horror Movies That Should Have Won The Oscar For Best Picture 5.2k VOTES Only two horror movies have won Best Picture at the Academy Awards: The Silence of the Lambs in 1992 and The ...
#3 of 7 In Case You Missed It: The Biggest Horror News From Feb. 8-14 115 VOTES A new Stranger Things trailer teases the return of a fan-favorite character, Krysten Ritter joins a new comed...
#19 of 178 The Best Monster Movies 7.7k VOTES The best monster movies are sure to give you a good scare, so if you’re looking for a good monster flick to watch next, this...
#4 of 52 The Best Gothic Horror Movies 6.2k VOTES Gothic horror (also commonly referred to as gothic fiction) is a genre of literature or film that typically combines horror,...
#7 of 115 The Best Old Horror Movies 32.7k VOTES The best old horror movies include classic scary films designed to terrify. Early horror movies tapped into our deepest fear...
#63 of 91 The Best Wedding Movies 96.1k VOTES A list of the best wedding movies. These are films that feature engagements and getting married as a central theme. If you b...
#21 of 207 The Best Classic Horror Movies 83.6k VOTES If you’re a true horror film enthusiast then you’ll recognize these famous directors and the movies that earned them worldwi...
#19 of 69 The Best Walter Brennan Movies 1.8k VOTES List of the best Walter Brennan movies, ranked best to worst with movie trailers when available. Walter Brennan's highest gr...
#3 of 42 The Best Billy Barty Movies 293 VOTES List of the best Billy Barty movies, ranked best to worst with movie trailers when available. Billy Barty's highest grossing...

Bride of Frankenstein is also found on...